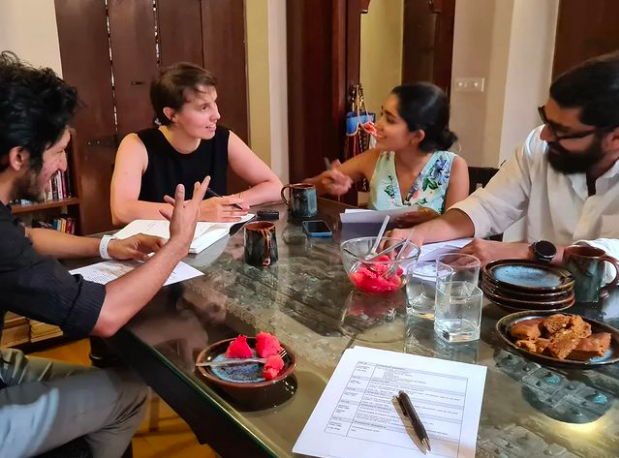 We are a team of diverse & engaged individuals, a group of filmmakers, educators & artists who are passionate about sharing our knowledge & expertise with the next generation of changemakers.

Rahul is a photographer and a filmmaker based out of Goa, India.

He has a keen interest in capturing the emotions of life through his lens. In his work, one can find a strong sense of visual aesthetics, and a rhythmic flow of visual storytelling that primarily revolves around the subtle nature of human life.

Raiza is a filmmaker and cinematographer from Calicut, Kerala.

She is a design researcher by profession and has inculcated an overarching theme of creating meaning in her films as well. Her films are all created from her surroundings and life to convey the mundane feelings of the everyday. Capturing the complexities of emotions is primary in her films. They are also subtly political as she fights for women’s right to choose the course of their own lives.

Sophia is an artist & filmmaker living in Hamburg Germany. In her artistic practice, she focuses on the development of interdisciplinary works at the intersection of sound and word, film art, movement, painting and space.
Her working method is fluid, situational, and process-oriented, and her installations and performative interventions are driven by political contexts. Documentary film as activism is another way Sophia works on social lines of conflict and collaborates with actors from different fields.
www.yamkamuna.com | @baum.pilz

Sidharth is a photographer and filmmaker based in Kerala who enjoys telling stories that reflect his hometown’s rich and ingrained culture.

In the stories he tells, he strives to instill a sense of genuineness. Sidharth is also a member of the musical group V Minor and has given three TEDx talks on their behalf.

Juhi Pandey is a craft and social design professional currently based in the Northern East of India in Shillong, Meghalaya.

Her core work involves facilitating community and crafts development initiatives that take into account the demands of local ecosystems and traditional cultural knowledge.

Michael Kress is a conceptual artist living in Hamburg, Germany.
His examinations use different media, like video, drawing, writing, sound, & photography with the aim to understand the global culture more as a source rather than a concept of identities for understanding the other as an author.

For several years, Kress has been engaging in cultural politics. He has been chairman of FRISE/Hamburg & board member of the Deutscher Künstlerbund (German Association of Artists). In 2015, he initiated Hyper Cultural Passenger, global cooperation of artists and philosophers based on the river island of Hamburg Veddel.

Katharina Poggendorf-Kakar works as a writer and artist in a village in Goa, India. She is also the founder and director of the NGO Tara Trust which utilizes art and creativity as a tool for growth and education
Katharinas body of work emerges from her academic base in comparative religion and anthropology. She perceives her art and writing as a confluence of her work and life choices of the past 30 years. She divides her time between writing and art projects.

With a background in fashion & fibre arts, followed by over a decade of research and exploration into textiles and consumer culture, Sonja now works largely as a facilitator and specializes in the business and brand development of social and startup initiatives. As a result, she has been fortunate to consult on a variety of projects in collaboration with individual artists, arts-based organizations, and independent retailers around the world.