The new Veddel Art Space as a lightbox  – Projections from the inside out in moving images on the theme of distance and proximity.

“The most difficult thing in the world to learn to see is the obvious, the familiar, the universally taken for granted.” (John Dewey)

So Close / So Far takes a look at the diametric concepts of distance and proximity. Title and theme are being projected – metaphorically and abstractly, as well as concretely and real – by diverse video installations into in the public night space.

Proximity shows what is right in front of me, always there, perhaps little noticed, boring, or even banal, directly inside of me and part of my body, hurting, injured, disregarded, and embarrassed… Distance promises me the unknown, the horizon, orientation, hope, the strange, the unattained, hopeless and promising, misbelief, loss, and death…

So Close/So Far thematizes the situation in the pandemic and the respective subjective feeling of being enclosed in one’s own space. Physical distance leads to the loss of publicity and thus to the reduction of others to data. The feeling of closeness, body, and immediacy becomes information on digital devices. In their conditional simultaneity and contradictoriness, the motifs of So Close/So Far refer to an interaction from inside to outside and the reversal of the view from outside to inside in an expanded space of perception/art. 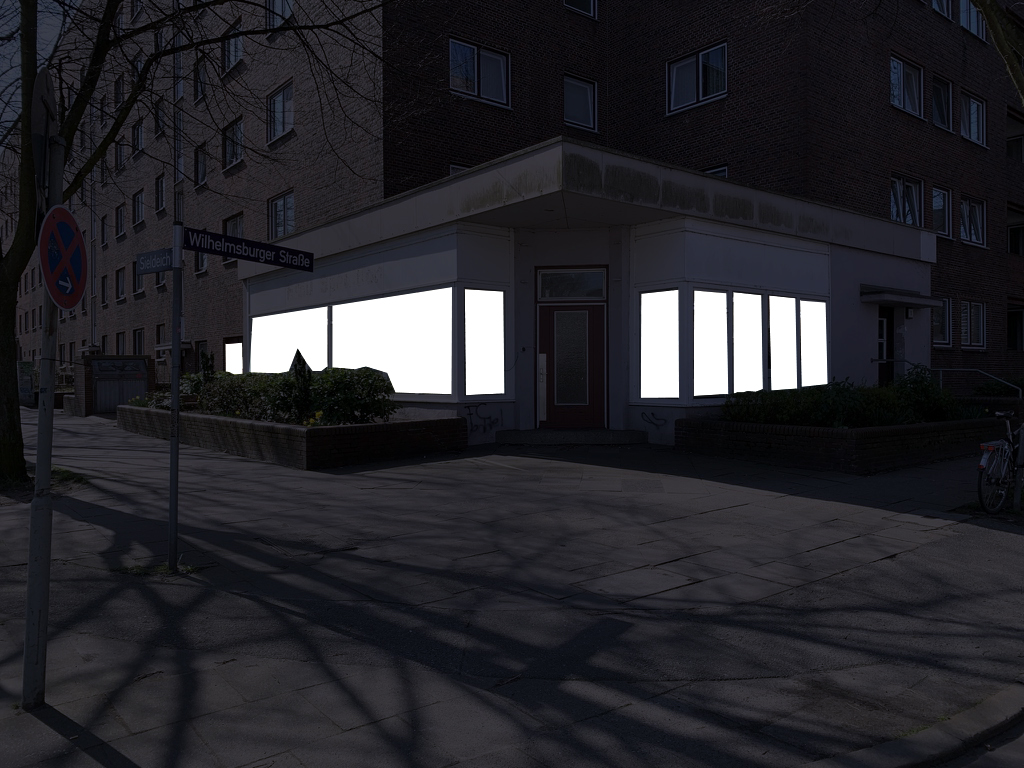 For four weeks, the hermeticism of the interior space (white cube) is inverted into the exterior world. The Art Space becomes a play of light at night, as an extended lens in the public space. The shop windows of the Art Space become a four-part video installation. Using the means of video art, a kind of visual short-circuit shines into the eyes of the viewers, overcoming the experienced social distance as a direct, communal event in public space.

Four thematic blocks design four artistic viewpoints in the tension field between the private and the public (self – domain – field), between distance and proximity. So Close / So Far opens perspectives on a global narrative with artists and partners from Veddel, the city of Hamburg, Groningen, Shanghai, Taipeh, Tokyo, and Tel Aviv/New York.

The thematic blocks are:

I. Immediate (the own body / the other body)

II. terminals – of people and machines

IV Spaces (the private / the public )

Participators are artists from the direct neighborhood of the Elbinseln, as well as from the urban art landscape of Hamburg, and there are national and international contributions of different artistic conceptions.

The video works oscillate in a tension field between a close interior view and a delimited, extrinsic projection onto an unreachable distance.

The interpretations of proximity and distance are at the same time confrontations with linguistic and cultural differences.

It is not only in the pandemic that we live in these contradictions of the political. Responses are often mixed up with supposed strength and an unconditional desire to be right. “Are we driven by disaster or by debate?” a young globalized generation rightly asks.

Art can show what is the case – as a mirror between fear and hope.

The lightbox of the Veddel Art Space invites you to stay for a summer night. The videos are shown simultaneously on all screens. They are interwoven with and into each other as optical modules and form serial orders. At the same time, the viewers can change their own position and let the newly positioned view turn from outside to inside and vice versa.

We hope for barrier-free access for our direct neighborhood to contemporary art and an opening of the closed White Cube, and we hope for many sympathetic friends of art, whom we invite to the Elbinsel.

About HyCP: The Veddel Art Space was originally intended to start in 2020 as an art HUB, making connections between the harbor space, the neighborhood of Elbbrücken, Hamburg’s cultural landscape, and numerous international art venues. Since the beginning of the COVID pandemic, we have been striving to transform the enforced distance into artistic formats of proximity. Thus, we have relaunched a project with artists from the USA and the Veddel as a ‘Remote Artists Conversation’.

In addition, we have digitally designed other projects, such as a city exchange with Aarhus, at an early stage in the form of an online conference and an OnSite showcase exhibition with digitally submitted works. For the first time, the conceptualization presented here aims to present – both publicly and physically – HyCP as a site and to take up the play of proximity and distance experienced in Pandemic as a political field of action of aesthetic experience.

HyCP is a cooperative project of artists, philosophers, and other cultural activists. Our project aims to consider culturality as an exchange of local and global discourses.

The metaphors of the passenger and the hyper-link open up associative and contextual cultural possibilities of connection that are explored through the means of art: Possibilities of a critical common sense, which we want to investigate and develop at the same time. To this end, we offer our approaches for discussion.

HyCP has been organizing artist-in-residence projects (AiR for short) for 9 years. Together with worldwide partners, we connect artists from Japan, China, South Korea, India, Jordan, Israel, Turkey, the Netherlands, Finland, Iceland, and the USA with Hamburg’s cultural landscape. Since 2012, we have hosted 124 artists. HyCP is a member of the international network PORT JOURNEYS, which connects port cities worldwide with art actions, conferences, and AiRs.

Until 2018, HyCP was located at FRISE-Künstlerhaus Hamburg. The move of the project to Veddel is a content-related decision to be able to live and address cultural diversity directly with the local people. The new rooms of the ‘HyCP Veddel Space’ are designed to open up to the district. The location is being converted into an “artist-run space” that is as barrier-free as possible – making it one of the first in Hamburg. The space is designed for flexible and open uses, as well as for studio work, exhibitions, presentations, seminars, workshops, and artist dinners, i.e. also for public district artwork. With two living rooms, the space offers accommodation for guests, who usually stay for about 4 weeks. Together with artists from Hamburg, open formats such as co-labs are tested. Art is negotiated here in a non-hierarchical, discursive, and transdisciplinary way.

The aim of the ‘HyCP Veddel Spaces’ is to use the possibilities of art to bring together institutions (such as schools, associations, initiatives, churches, mosques, etc.) with artists from all over the world in order to create a diverse, critical, but also a common picture of the world and to learn from each other.

Sponsored by the Kultursommer Hamburg