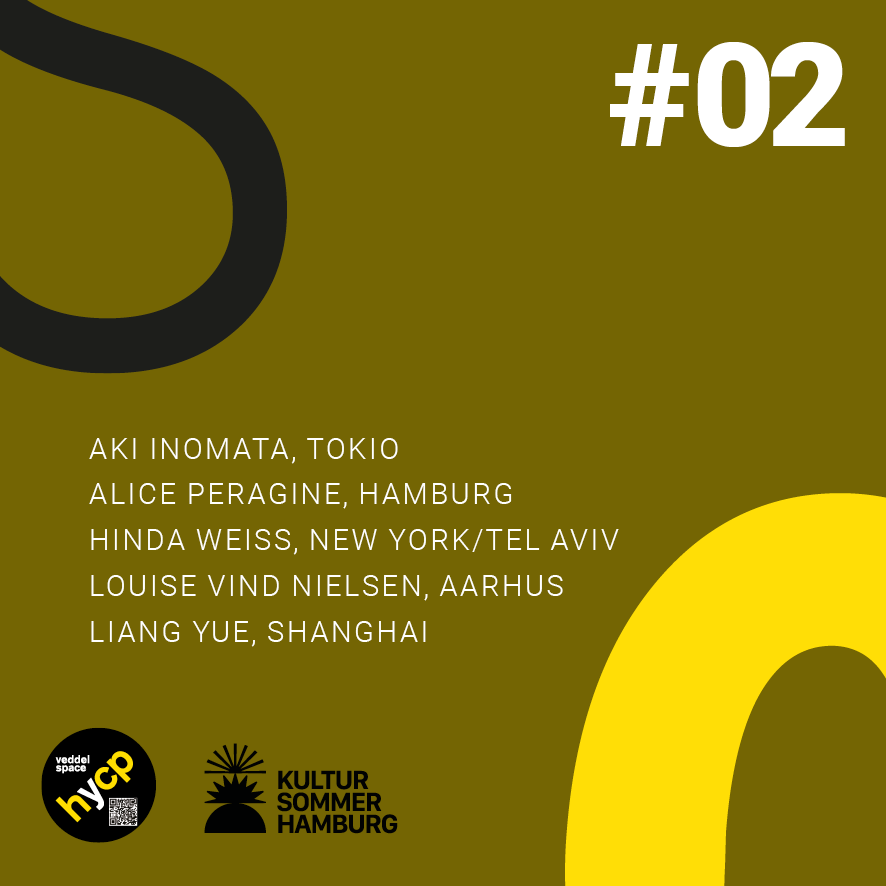 INVITATION TO THE OPENING
THE VIDEO EXHIBITION

from sunset to midnight

Lives and works in Tokyo, Japan
Focusing on how the act of “making” is not exclusive to mankind, AKI INOMATA develops the process of collaboration with living creatures into artworks. She presents what is born out of her interactions with living creatures as well as the relationship between humans and animals.

Her major artworks include Why Not Hand Over a “Shelter” to Hermit Crabs?, in which she created city-like shells for hermit crabs, and I Wear the Dog’s Hair, and the Dog Wears My Hair, in which the artist and her dog wear capes made out of each other’s respective hair.

After prospering for 300 million years, the ammonites disappeared when the dinosaurs went extinct 66 million years ago. From shell structure and fossils, it is assumed that the ammonite is closely related to the squid and octopus. The octopus has thrown away its shell in the course of evolution, but it is known to use tools such as coconut shells and bivalves to protect its soft body. Inspired by this evolutionary story, I began a journey of thought experiments to restore the shape of an excavated ammonite shell and arrange an encounter with an octopus.

Hinda Weiss is a photographer and video artist based in Tel Aviv and New York. She holds a BFA from the midrasha school of Art and an MFA from Columbia University. Her work has been exhibited in solo exhibitions, group exhibitions, and video screenings in venues such as the Israel Museum in Jerusalem and Jewish Museum in NYC.
„My works are compositions of landscapes that are charged with local histories and echo human existence. Using video and sound manipulation with digital adaptation techniques, I merge places and times into non-existing yet very familiar environments. Contrary to the highly processed editing methods I use, the way I collect my materials is simple: me, alone with a small camera“.

7 pm, Video, color, sound, 2021
In March of 2020, New York City has found itself an epicenter of the COVID-19 pandemic. The streets emptied, and so did the buildings. Many residents fled the city, and the usual crowds of tourists, business travelers, and students were gone. On 27 March, the remaining New Yorkers joined cities worldwide to cheer front-line workers from their apartment windows and terraces.
Once a day, at 7 PM, the thin line between private and public was activated. Isolated individuals became an assembly and the city a cathedral.

Hamburg-based conceptual sound-, performance visual artist and composer, working in particular with performance, sound, and film.
Born in Denmark in 1984, Louise Vind Nielsen on an island called Mors. She is passionate about experimental music and analog synthesizers, feminisms and dogs, poetry, gardening, and drumming. Her first instrument was a dusty grass-green pump organ, which was stowed away in the attic of her grandparents’ house. She would like to visit the North Pole.
Louise Vind Nielsen’s body of work deals with the mystery of how we listen and perceive our surroundings, as well as the interrelations between humans and machines as well as human-human relations. In a diverse artistic practice connecting elements of poetry, mythology, music, and social engagement she seeks to examine complex themes with an obscure and humorous approach.

Louise loves to teach and loves to learn (slowly). Everything she is doing is based on curiosity and the urge to create aesthetical and social situations in which humans create and develop together.

This new short film by Louise Vind Nielsen consists solely of diary-like footage that she captured with a mobile phone. A poetic narrative dealing with comparative measurements of size, struggle and subjectivity.
In one continuous shot at a bus station in Austria Louise Vind Nielsen zooms into the perspective of an ant striving to bring a single sunflower seed from one place to the other. The seed stems from the bread that the artist had just consumed. The landscape in which the ant moves appears to be a vast unpopulated desert of stone. The tense struggle of the ant is both reinforced and conflicting with the overwhelming sounds of the busy inner-city traffic.

At the center of Alice Peragine’s artistic work is the ambivalent relationship between technologies, environmental conditions and bodies. In her room installations, videos and performances, she examines the interdependencies between technical developments and their ecological and social effects. Peragine’s interest is particularly in materials and media whose functions are directly related to the human body, such as protective clothing, medical applications and smart technologies

The video Headrester (thank you for holding (2020) shows a fragmented body wired in various ways. Accessible via a QR code, a voice through a fragile and brittle (telephone) connection can be heard on the audio track of the video. The transmission is interrupted, signals overlap and remain in between.

Works and lives in Shanghai, China and Toronto, Canada

In LIANG Yue’s works, either photos or videos, the “daily” is always taken as a focus. She uses the easy-to-get materials with her acute art talents, keeps seeking, exploring, and capturing the daily routines, and extending form concerning the life in the city to gazing the eternal scenery in nature. A clear clue of her art practice could be witnessed in the massive works during the past fifteen years that the exploration for the beauty of insignificance, especially her videos, in which she keeps simplifying and abandoning the techniques of shooting and editing, challenging the art appreciation which the audience has been used to, as well as the viewers’ retina and eardrum, patience and rationality, and further questioning the so-called significance and value of art as she treats the meaningless as the ultimate significance of her creation. Her works remind us of the manifesto by Herzog stated in his Minnesota Declaration: Truth and Fact in Documentary Film, that:
The moon is dull. Mother Nature doesn’t call, doesn’t speak to you, although a glacier eventually farts. And don´t you listen to the Song of Life.