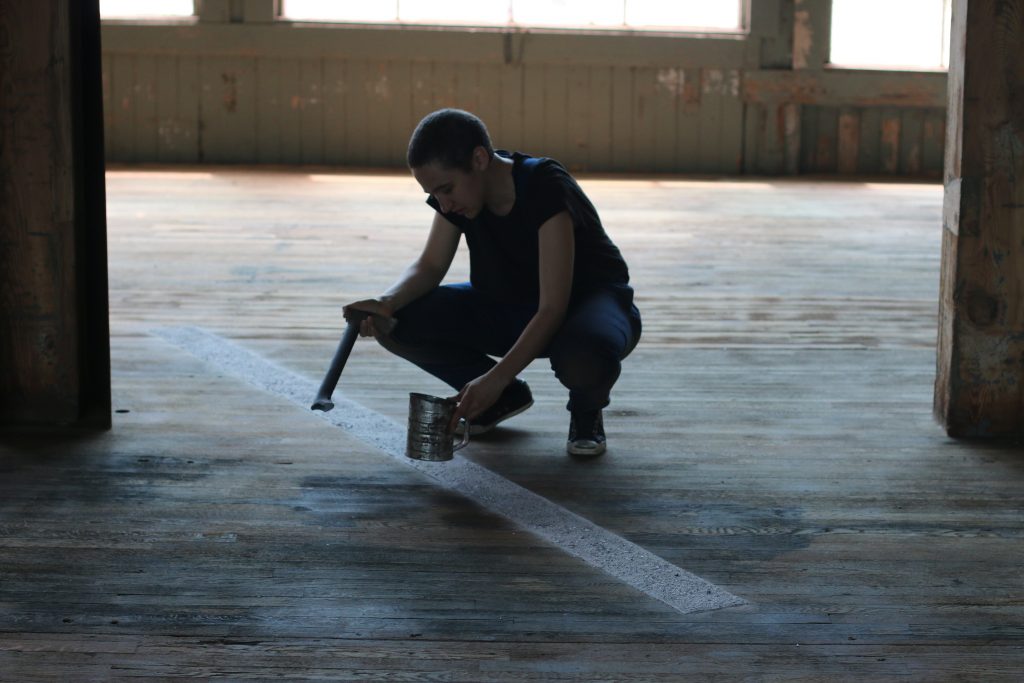 down to earth: tracing the sutures
of the American A2 bomber jacket

Re-examining a heritage of disaster sensed in the the smooth Elbe river bricks of Hamburg back in 2014, Rebecca returns to FRISE with a project that begins to stitch together pieces of a personal history—beginning with hand-processed leather from two American deer hides and a pattern traced out of her grandfather’s personal monument, his WW2 bomber jacket.

Rebecca Beachy’s work presents the accumulation of reformed and tended animal material, collected among many walks and through many acquaintances over many years. This includes her 2014 work with FRISE,
“I walked in particular weather,” which marked experiences with Hamburg’s Elbe River, communication with local birds, and histories sensed through the objects encountered—including ruined-bricks turned river-stones found during the Elbe River’s low tide phases.

Concerned with the effect of time and disaster on the places we inhabit, Rebecca’s recent project Inherencies, located cremated animal bones and mud from birds’ nests as mortar, patching the rough brick exhibition space with these materials alongside ash-casted sculptural objects and tended animal matter, meeting the question, “how repair ruin?”

Upon return to Hamburg in 2017, Rebecca explores more deeply an underlying heritage sensed in the smooth Elbe river bricks as possible remnants of her grandfather’s bombing campaigns over Germany during 1943-1944.

Through an attempt to replicate her grandfather’s historical American “bomber jacket” and using twenty-seven personal diary entries from his WW2 missions as radio-operator and bombardier within the 8th American Air Force, Beachy’s current project takes this material reflection further, meditating on the process of tanning leather from raw deer skin as a way of addressing the space between abstract aggression (from a disembodied distance) and more intimate, small-scale manifestations of the same.

While the broken bricks smoothed over by the river reflect the story of a wounded city, the development of leather out of raw skin tells a quieter history: of wounded animal bodies tended to and worn as monuments of disaster. This attempt to address an individual alienation from history and material positions leather itself as a traumatized landscape and considers the “heroic” leather bomber jacket as a wounded body worn as an emblem of a larger, incomprehensible trauma.

2015 Keep Your Mind in Hell & Despair Not, The Terraformer, Chicago, IL, by Christopher Smith