This is where it begins. Drawn to the center between the peripheries of land and water, we enter into a strange ceremony of fearful fascination,
automatic administration of clearcut chaos, a deep void of wild autonomous capitalism. Aborted commitment of open doors to the world,
we turn around, turn again and again, finding no entrance, no exit,
we adhere to the front.

Giving voice to this landscape can never exceed its contemplation,
when facing the fast and terrible beauty, the hope to eventually escape the gray, words cannot grasp this realm of order and disruption. In the delineations of burnt rocks, dikes, and grids the purpose of the city, its history, its currency, its accuracy, are appearing underneath our hands, our feet, harshly. Here, the boundaries, gaps, and forms are recorded in the skin of memory traces of a touch on the interface of the shore.
Clemence Roudil is Artists In Residence at FRISE, Hamburg, August 2017 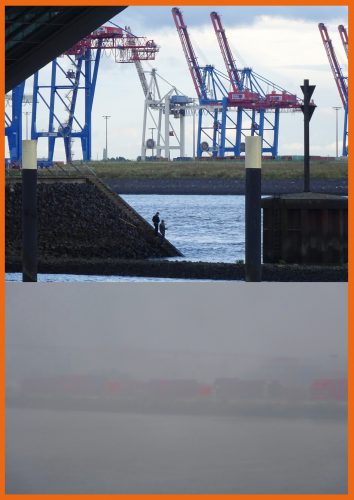 With a special thanks to Belinda Grace Gardner for her valuable support and
for her always accurate and sensible look.