Out of an ongoing process of dialogues and musical communication, Ariel Flórez and Heidi Salaverría developed the project “Syncopated Resistance”. Tracing both the vicinity and the tension between philosophical thoughts and the Afro-Caribbean tradition of music, they travel through times.


The project exposes the rhythmic impact of binary thinking of western philosophy, claiming that it partly follows the phantasm of certainty, which rhythmically translates into the downbeat of 1 and 3, whereas Afro-American rhythms populate the regions of the offbeat, thereby articulating a specific kind of resistance. Tracing back the formation of Afro-American music to colonialism and slavery, the workshop explores the resistant potential of syncopated experiences.

The video, which resulted out of those many dialogues, is structured in different time steps: It starts with the zero, a meditation on silence, proceeds with the 1 and the corresponding associations on metaphysics and down-beat, the 2 with the corresponding problem of dualism reflected in the European tradition of the marching music, which is a music of war and imperialism, the 3 as an overcoming of the dualism which, in terms of rhythm, for example is being reflected in the Afro-Caribbean clave.

The project stems from the assumption that the binary structure of western thinking is being reflected in western rhythmical structures and vice versa. Western music traditionally emphasizes the downbeat, most strikingly expressed in the European march music, which basically is war music: Rhythms of order and obedience, which impose and conquer the territory of the Downbeat, much like the colonizers imposed themselves on territory that didn’t belong to them.

The will to certainty, which pervades European thinking since modernity, could be called “downbeat-thinking:” Both, downbeat and certainty, expose a territorial posture. The territorial posture of the will to certainty consists in its will to make knowledge identifiable, which means, to dominate and to control it, by using two strategies, one of which is the identical repetition. And although it doesn’t work, this dream – which really is a nightmare – still haunts our thinking, at least since Descartes, and it resonates depressingly in the Eurotrash music, which almost seems like a parody of that certainty-fantasy. In political terms, it is expressed identarian thinking, holding on to the imagined purity of an origin (say, some German identity), which needs to remain identical and untainted.

The other strategy is the principle of binarity (white/black, male/female, mind/body, ego/other, etc.) that splits the world into a dual system, always cherishing one part of the pair at the expense of the other, which then needs to be depreciated. As we know, this binary principle from the outset has been phantasmatic, because its downbeat-certainty-side dialectically depends on its other side. This is why the will to certainty is inherently violent, in trying to silence otherness. And this is not only an academic consideration of thought-structures, but has a very material economical base.

Concepts as culture, aesthetics, and freedom as well as the concepts of enlightenment, identity, and nation seem so natural to us today, despite the fact that they are relatively young, and that they all have been invented, more or less simultaneously, in western modernity. They unfolded their impact in the course of the military and economic expansion of Europe. The idea of the artistic genius, the ideas of aesthetics and culture are inextricably linked to Europe’s colonial and violent extension of trading routes by enslaving Non-Europeans. The economic basis of western liberty is and has been the killing of Millions of slaves and indigenous people in America, and the bondage of those who survived.

The slaves that survived the inhuman transports to America had been torn out of their different African societies, cultures, and languages, and not only had to cope with unbearable material living conditions, but also with the fact that they were being separated from other slaves speaking their language, leading to a complete isolation.

Afro-American music originated out of this traumatizing silence. Rhythm many times represented the only way to communicate, to build a community, to console and to empower themselves. And the common denominator of all Afro-American musical traditions is the rhythmical complexity of the syncope. The slaves (at least, in the beginning) had no property, no territory, so they inhabited the offbeat, in between the 1 and the 3, and infinitesimally between those betweens, occupying spaces the slave drivers didn’t even know existed.

In contrast to downbeat marches, the offbeat rhythms don’t obey, but resist. Moreover, they leave behind the phantasm of certainty of atomized egos, but instead become alive through the communal interlocking of various players. Instead of the phantasm of machinerized identical repetitions, they unfold their power through permanent variations and improvisations in the repetition, which seem to stretch and to bend time. The resistance of the syncopation is based on silence, through the surprising use of unexpected pauses, thereby opposing the colonizers and their intent to silence the slaves. Through syncopated music the slaves started to re-appropriate their sense of time. Seemingly out of nothing, rhythmical abundance emerged, and with it, a regained sense of resistant subjectivity. 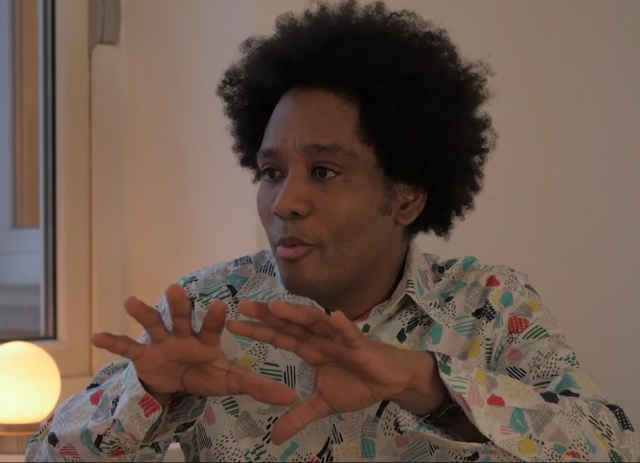 As a multiinstrumentalist, he has performed shows in Hamburg, throughout Europe, and Latin America, most recently with his own project “Afinque Mulato,” with “FClan” (Cuba-Reggeaton), with “Larsito” (Culcha Cundela), and with “Cubanissimo” (Salsa).

He has cooperated with the Colombian choreographer Carlos Jaramillo, most importantly as the musical director of the contemporary dance project “La Esquina Desplazada” (the displaced corner) in Bogota, Colombia.

As a performer and as a teacher for percussion, saxophone, flute and clarinette, he cooperates with the Cervates Institute of Hamburg, and others.