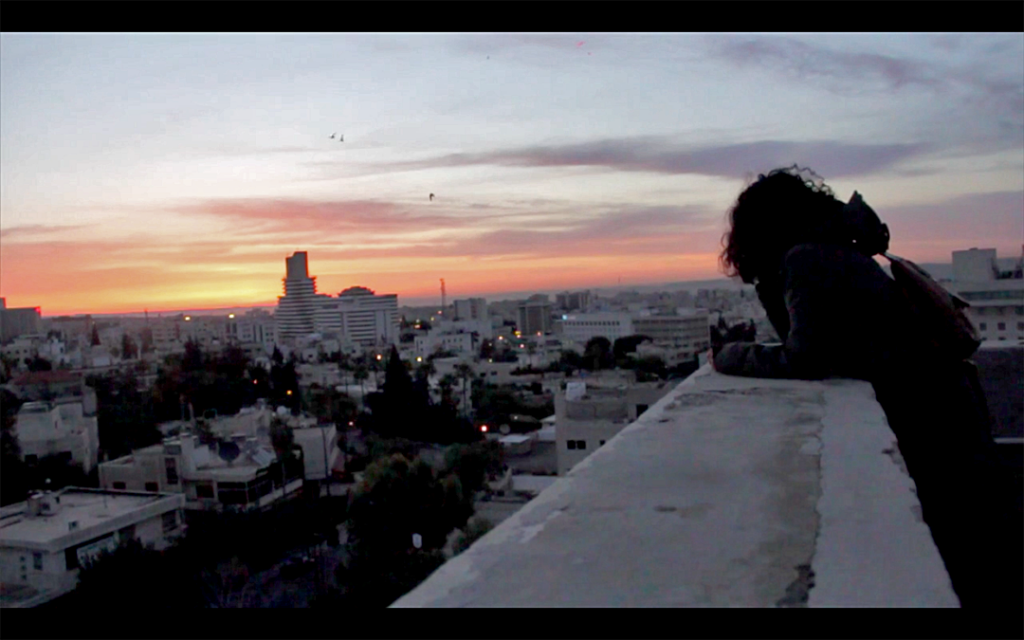 Video Still “In Between” a collaboration between Reham Sharbaji and Ameer Masoud
Editing by Hussan Da’na produced during a workshop by Bahbak Hashemi-Nezhad “Becoming Strangers” during the 3rd edition of Spring Sessions (2016), thespringsession.com

PARTICIPATING ARTIST OF THE EXHIBITION “THE SHAPE OF THINGS TO COME”,
PORT JOURNEY MEETING 2016

Born in 1983, Reham Sharbaji is an artist, writer, and translator based in Amman. Her formative years were spent in the Arab region, after which she moved to the Punjab to reconnect with her maternal roots and train as a painter at The National College of Arts in Lahore. Her work traces notions of the self that are derived from the habitual, the mundane, and the ephemeral moments of spiritual clarity which are often lost to the grey areas in-between.

In the Arabic language, every noun and name is gendered, and so everything becomes personified merely because the nature of the language deems it so. And so, Amman is identified as feminine, carrying with it all the nuances that are associated with gender. Streets and houses are masculine, yet rooms and memories are feminine. In this video installation, the artist questions her own identity and that of the city in the context of calling Amman a home, which, in this instance, is a masculine word. “Who is she?” she asks, “who am I?” she quickly retorts. She walks the streets of the city trying to understand her love/hate relationship with it in an attempt to resolve unspoken feelings and unfelt words; re-examining personal spaces in the public and private spheres. Spaces that represent elusive childhood memories that haunt her, the same places that are now unfamiliar and alien, yet it is the same city, and she is the same person. This installation was produced during the third edition of Spring Sessions, Amman, as the artist’s personal project.